(should one ever exist)

and has no need of ‘government’ largesse. It’s always the UNfree that need government intervention*.

“Dunedin mayor Aaron Hawkins​ is urging H&J Smith to consider help from the Government before closing its department store in the city.”

Self-interest is the greatest motivational force

It’s beneficial when harnessed by YOU in your own interests, and at it’s most vicious when invoked by others in YOUR interests. Now go look up the words ‘Lenin’ and ‘Stalin’ and ‘Communism’. I can wait, go get ’em Tiger (and prove me wrong).

“Hey! You! The mangy mutt with the moth-eaten fur!”

“Cool it with trying to make ’em think! … … Damn’ goody-goody busybody Dog! You know I almost had ’em, all, right there?!”

*  That’s you, and me? (Don’t answer … hypothetical question. Forget that I ever asked, it’s exceeding my brief, and brevity is indeed the anti-verbosity soul of something more or less succinct; no?

So in a Free Market (hah! I wish …) we would be free to choose whatever we want to use as money. And in the past, in different geographical locations—folks did exactly that.

I TAKE AS GIVEN

that everyone needs a convenient ‘means of exchange’ to replace barter. So everyone uses something serving in the office of money. Historically the physical money problem resolved often into gold, silver, and copper. Scarcity, and the costs involved in collecting those metals made them ‘precious’.

Wannabe dictators forced valueless artificial ‘currencies’ onto their serfs—power overriding rationality. Yet in the long run it is the Market itself that determines the value of a currency.  And when a free market succumbs to force of arms … alternate currencies arise. Think about it: what holds it’s ‘value’, an ounce of pure gold or a dozen wheelbarrows full of printed paper? Such a situation isn’t hypothetical: 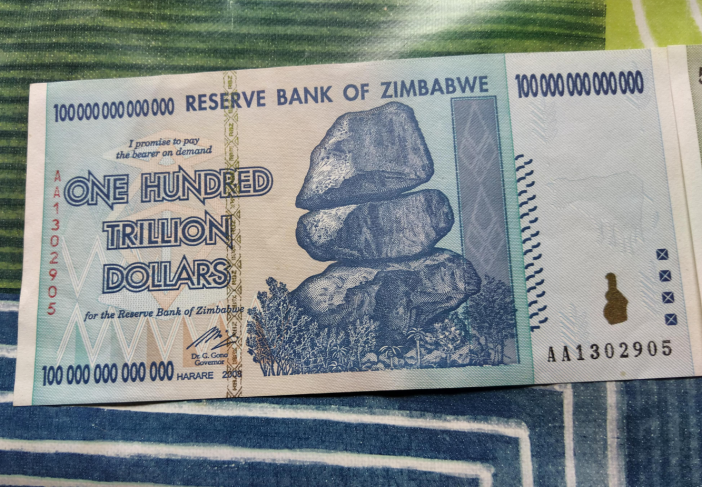 —and if you think such couldn’t happen in Europe or America … it has. Inflation, and hyperinflation. Brrrr. I want money I’m involved with to both facilitate transactions  AND be a ‘store of value’. Again, gold and silver … not printed paper.

And now: we are offered ‘Terminating money’? Do you remember the old game called “Pass the parcel”? But played (for real) now with absolutely nothing inside the final layer. (Nothing— but oh, so beautifully wrapped …)

3 cubic acres of money … what would happen to the ‘value’ of such if it were to be loosed on the peasantry overnight?

But it’s actually from basic statistics—as is wot I never really mastered but do remember that twin peaks in your histogram was often indicative of two processes at work.

So whaddya make of the above, hmmm?

Hey … don’t ask me, I’m just a dog waiting to be let out of the kennel and off the chain. Go ask one of them kiwis, they’re clever. (Certainly, Yanks, our Prime Ministress is prettier than your President—now just try to trump that!)

Facts are for egg-noodles and counters of the executive bean. Our futures lie in trends. (You know, them pattern fings we read about, Guv.)

Which is me, though, to a ‘t’. I look for patterns, I integrate observed rates and make predictions based on elementary calculations and subconscious conclusions.

GIGO rules, in fact … so I try always to verify:

if it looks good,

it must be true*.

For me. For you? Who knows …now ponder how many folks out there believe in God. Christ. Moses. Abraham. Allah. Buddha. Vishnu. Thor. Odin. Krishna. Viracocha. Isis. The Great Earthworm … and I wonder if in my naive irrationality I may not be no more loopy than the rest of ’em. But here’s a refreshing statement I just pulled in from some university bound egg-noodle in New Zealand—

“It’s a bit like the road toll. If you have a bad weekend or a good day, or a bad day, it is the pattern that you’re after…”

—and who could possibly argue with an egg-noodle?

someone has a good name … doesn’t necessarily mean they are experts in everything. Try this quote on, tell me what YOU think. It’s from Der Spiegel*: CLICK ME

“This loss of prestige of the North is also reflected in the fact that no country is capable of assuming a global leadership role. The U.S. is no longer a global power, and China is no longer a role model. What we see instead are nation states going their own way.”

But wait, it gets better—

“The question of how they will emerge from this crisis will determine who we will look to for guidance in the future.”

“This could lead to social uprisings, not in the form of revolutions but as a redefinition of the democratic exercise of power.”

As I’ve mentioned before, ‘Democracy’ is best defined as two wolves and a lamb voting on dinner …

“I see great efforts from the Chinese side to help Africa. And I think this will pay off in the end, because America is currently doing nothing to help and Europe is doing very little. China will be an even more important trading partner in the future than it already is.”

The most successful method for a pusher to get someone hooked on drugs is to give him all he can gobble at a ‘loss leader’ price (bait). Once sucker is hooked the pushers then charge whatever they like …

is a ‘western’ news outlet, why all the anti-western rhetoric?

what can they do?*  Wait another three, four, five, or more destructive years to vote the bastards out?

Vote a new bunch in.

We can take it as a given (by me) that no-one enters politics for anyone else’s good. Doesn’t happen. Can’t happen ... you know, human nature, can’t be beat. As I’ve said before, often, your very own personal sole unique (fought and died for in the war) vote is entirely meaningless. Don’t just take my word for it (you won’t…), THINK about it.

Then take my word for it.

YOU GET THE RULERS YOU DESERVE

I agree. Sadly I too get the rulers you deserve, but short of having an ethics lobotomy I could never change things myself. Too old, too realistic. People may vote for old (yay!) but they very rarely vote for real (boo!)—any fool these days offering “blood, sweat and tears” (wotever) wouldn’t last doggy-doo seconds in The House (if he, she, or it even got that far).

IF THE PROOF OF A THEORY

lies in the satisfactions of predictions made, then here’s my theory:

like we’ve never known. But hey, don’t take my word for it. Let history be the judge. History, past-present-future. In the meantime, here’s a closing thought, make of it what you will.  Go for it~!

*  (Heehoo has the mostest biggest guns and unethics will win.)

dog. As a domestic pet I don’t do sums, but even so something like this (below) intrigues me—

However, with each passing the day the costs also mount. It’s not only the $500 million a day the Government is spending on subsidies and benefits, but also the very real human cost of kids out of school, mental health issues, family violence and redundancies.

—it’s with reference to New Zealand: a smallish country of two main islands, herds of little isles and a population of just under five million. Which means even a dum’ dog has to ask:

“How many of that five million kiwi folks are Producers, and how much can they contribute to the five hundred million dollars every day?”

I might also (but shan’t) ask the writer of that article how are the New Zealanders ever going to repay such debts? (Unless they simply exchange the country itself for a clean slate and start again as serfs?)

Like I said, I haven’t bothered to verify—you know; dog, fleas to scratch, balls to chase and the odd bone to chew. I leave such questions to the nice folks in Parliament and their University advisors who might just be on to something with their “One World Government” thing—so long as it comes only after I’ve shuffled off this mortal coil.