are not to be denied or decried … they are to be celebrated! Blessed is the Lord, and who are we to query, question, or deny?

Dozens of pastors across the Bible Belt have succumbed to coronavirus after churches and televangelists played down the pandemic and actively encouraged churchgoers to flout self-distancing guidelines.

As many as 30 church leaders from the nation’s largest African American Pentecostal denomination have now been confirmed to have died in the outbreak, as members defied public health warnings to avoid large gatherings to prevent transmitting the virus.

The tragedy among one of the largest black Pentecostal groups follows a message of defiance from many American churches, particu—

Truly blessed is the Lord, who sendeth the cures for His holy plagues. The only pity here is that the innocent go under the mallet too often too …

that must explain something,

—and thus it is official~!

For the first 26 years of her life, Megan Phelps-Roper belonged to America’s most notorious hate group, the Westboro Baptist Church, a community of religious zealots founded in the 1950s by her grandfather Fred Phelps. Westboro celebrates terrorist attacks and gatecrashes military funerals with signs that read, ‘Pray For More Dead Soldiers’. They picket the funerals of Aids victims holding placards emblazoned with ‘Fags Go To Hell’. Their abhorrent behaviour is fuelled by the belief that these tragedies are God’s will – his punishment for humanity’s sins. On the outside of their church in a suburban street in Topeka, Kansas, hangs a banner: GodHatesFags.com.

Can anyone possibly refute their logic? I say not. Certainly to me what they do and say is abhorrent and an insult to human decency … but hey, you cannot argue it being The Will Of God. (I’d like to see someone—anyone—try!)

Unless of course you are one of those foul filthy reeking stinking God-damned atheist things. Yeuch! But even then you are fulfilling God’s will …

that before He created this universe God knew the entirety of its physical reaches and everything qua everything that would, did, will (and even might) happen within it. So—

So the nice fag-hating folks of their church are merely organic automatons following programs instituted by God. Ergo they cannot be blamed, no more than the fags or soldiers or any other victims of their putrid mindicide*.

Blame God  … I always do, but He’s never yet growled at me; not even once, so I must be doing something right and entirely in accordance with His loving omniscient will.

In addition to picketing and running their website, Godhatesfags.com, Westboro churned out hate-filled press releases in celebration of Aids, school shootings, famines and plane crashes, using scripture to justify their twisted logic.

Twisted? Matter of opinion; only God can answer. He won’t though …

AND IN OUR OWN WAY,

so do we kiwis.

We read about others and it makes us feel better … and now: fresh in from the most significant others (America!)—

THE ECONOMY IS SO BAD THAT….

My neighbor got a pre-declined credit card in the mail.

I saw a Mormon with only one wife.

McDonald’s is selling the 1/4 ouncer.

Parents in Beverly Hills fired their nannies and learned their children’s names.

A truckload of Americans was caught sneaking into Mexico.

A picture is now only worth 200 words.

When Bill and Hillary travel together, they now have to share a room.

The Treasure Island casino in Las Vegas is now managed by Somali pirates.

I was so depressed last night thinking about the economy, wars, jobs, my savings, Social Security, retirement funds, etc., that I called the Suicide Hotline. I got a call center in Pakistan, and when I told them I was suicidal, they got all excited and asked if I could drive a truck.

Can too … but not just yet zzzawwp …

it’s too bloody depressing. No point in other outlets or TV either. So I’ll just leave you for now with this thought from Der Spiegel—

If the infections flare up again, according to Drosten, this should change – because the pathogen is currently spreading under the blanket of the current restrictions, just slower. “Suddenly you have a wave of infection within a month that you didn’t expect,” said the virologist. Even if the reproductive factor was kept around 1 by then (which means that one person with Covid 19 infects one healthy person at a time), the consequences could be drastic.

From ‘Spiegel’ this date.

I loooove doom and gloom, it’s so very … human.

And I, now,  may just go off to watch my most very favouritest cheerer-upper movie:

—named for the character in the middle (although the one who stole—and holds—my heart is the one in the green jacket, Miss (SFX: drum roll, please)

—who, face it, is the most alive of them all. She’s feisty. She’s honest. Courageous. Devoted, and this above all: she’s innocent.

If ever called upon to take up arms again, I would do it for no other cause than folks like her. Stuff all your silly flags, anthems, songs, poets, propaganda, politics, BS, and ‘spin’ … it’s only people that count. (And bunnies …)

Try me, and stop one. (Cute sleeping doggy …)

someone has a good name … doesn’t necessarily mean they are experts in everything. Try this quote on, tell me what YOU think. It’s from Der Spiegel*: CLICK ME

“This loss of prestige of the North is also reflected in the fact that no country is capable of assuming a global leadership role. The U.S. is no longer a global power, and China is no longer a role model. What we see instead are nation states going their own way.”

But wait, it gets better—

“The question of how they will emerge from this crisis will determine who we will look to for guidance in the future.”

“This could lead to social uprisings, not in the form of revolutions but as a redefinition of the democratic exercise of power.”

As I’ve mentioned before, ‘Democracy’ is best defined as two wolves and a lamb voting on dinner …

“I see great efforts from the Chinese side to help Africa. And I think this will pay off in the end, because America is currently doing nothing to help and Europe is doing very little. China will be an even more important trading partner in the future than it already is.”

The most successful method for a pusher to get someone hooked on drugs is to give him all he can gobble at a ‘loss leader’ price (bait). Once sucker is hooked the pushers then charge whatever they like …

is a ‘western’ news outlet, why all the anti-western rhetoric?

Of this and that endeavour,

And dispute etc … see snippet below:

And having seen that, now see thou this:

Jakobsdóttir: Yes. We have introduced a tracing app, but use of it is voluntary. And the app we have provided is under the strict supervision of the Institution for Personal Privacy. In back-tracing infections, we have found out where the infected persons have been infected in 93 percent of the cases.

Of course the ‘tracing app’ for cellphones is entirely justified. And voluntary. AND, I imagine, so also shall be the case world-wide for anyone who so wishes. And as always I too, wish, for a double Lotto win.

Hell, even a single win might restore my faith in the power of prayer … or coincidence … in the meantime I’ll stick with integrating observed rates to predict logical outcomes. Don’t wait up.

Eventually this tree will topple …

Either way, this extremely successful man seems to make a habit of it. If it were a genuine (pathetic) attempt at a joke then he’s both the ultimate paradigm clown and not a good humorist. Or—

—idiots taking him seriously and shooting up with Ajax, Jeyes, Janola, Bashabug, or Chlorogerm both deserve themselves and are a once-living testament to American education. Now that I’ve whetted your appetite and dampened your ardour, here’s the ‘quote’ for you (not an active video link in itself, but to the news item) to make of what you will:

Click on the Leader of The Free World‘s nose to go to the source.  AND:

This presents one of the reasons why I’m so against some parts of the concept of ‘democracy’; but all I can say in defence is

WELL … YOU VOTED FOR HIM!

THE LATEST “IN” CRAZE.

You know: maxing out the ol’ credit card, waaaayyy through the gates to limits above and beyond the call of any form of fiscal acumen:

The United Kingdom’s economy is crumbling under the strain of the coronavirus lockdown and government borrowing is soaring to the highest levels in peacetime history, increasing pressure on the government to set out an exit strategy.

So we all know what happened in Dickens’s time to folks who couldn’t meet monetary obligations; the Heavies were sent in to repossess. So: whom today do they send in to repossess sovereign nations?

Just eat, drink, and be merry for tomorrow we diet. In spades … in the meantime here’s a further snippet you can add to the “D’oh~!” quotient:

Ministers have been struggling to explain high death rates, limited testing and shortages of protective kit, and the reality of the damage to the world’s fifth largest economy hit home on Thursday.

… hey, don’t ask me—I’m just a dum’ dog, remember? Go ask those nice baby-kissing horn-of-plenty politicians who are not even trying to cover their arses in the face of the wrath of the insouciant.

But rest assured, Your country is safe in the hands of your elected officials and their professional lackeys.

Until foreclosure, of course. Oops.

Now before any sardonic remarks, please read this:

“This month Hanoi expedited the shipment to the US of nearly half a million protective medical suits manufactured at a DuPont factory in Vietnam, earning a thank-you tweet from President Donald Trump.” 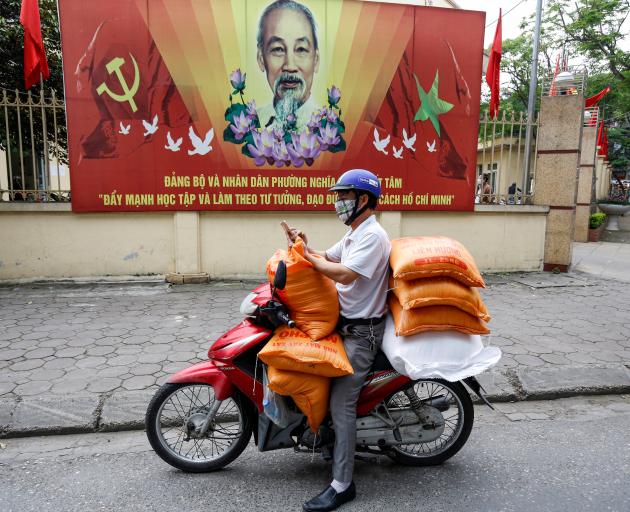 —and it is still burning in my memory of what America (and us allies) delivered to Hanoi decades ago. Different times, different faces. Different strokes for different folks … etc

And the beat goes on.