on the web. It has a certain resonance, a Jenny say kwa that will cause the average  modern punter to recoil in shock-horror-dismay; so—

We live in a country called Daftland

The England we knew is no more

Where sensible people do ludicrous things

Or risk breaking some Daftland law.

Less the villain has cause to complain

And to steal from a shop and say ‘sorry’

Means you’re free with no stain to your name.

When you lock up and go home at night

And there’s no way you’ll be in the right.

When speaking be wary in Daftland

As some terms that you’ve used all your life

And you’ll end up in all sorts of strife.

We elect politicians in Daftland

To give us the laws of the land

Yet eight laws in ten now come from abroad

The whole thing has got out of hand.

The borders are open in Daftland

And of migrants there’s no keeping track

Just a few of the thousands illegally here

Will ever be caught and sent back.

The exception to this is the hero

Who fought for this land in the war

He’s old and he’s sick, he might cost us a bit

So he’s not welcome here no more.

When the history is written of Daftland

That the craziest people in Daftland

Are the public who put up with it all …

—make of it what you will. Here, have another image gleaned from the web (from the website of a damned cynic I believe may now be a bit deceased) (but he was too damned real to live long anyway; I use his image to honour his memory)—

—and for social comment it’s a work of pure genius.

—and now that you’ve done the sums, here’s another thought—

“” …When it comes to the science, Robert F. Kennedy is currently focusing on one (out of many) concerns regarding current vaccination, which is mercury, one of the most dangerous toxins known to man — 100 times more poisonous than lead . He recently held a press conference at the National Press Club bringing this point up, offering a $100,000 reward for any scientist, journalist, or doctor to present a study showing that it is safe to inject mercury into babies…”

—namely, why aren’t they queuing up to collect that free ‘no brainer’ reward; kicking, gouging, biting, struggling ferociously to get to the front of the line before all the lovely freebie hundred-thousand dollarses run out?

“Surely if an unvaccinated child goes to school he’s at risk from the bugs carried by … …  … oh.”

has his or her favourite ‘news’ sources. One of mine is ‘Russia Today’. It comes across as legit but we all know of course that it’s Russian propaganda. No?

But prop or not, them dam’ Russkies think along the same lines as I

Trump pursues “no own policies” but only executes the decisions made by the “intelligence agencies, the Pentagon, the big arms manufacturers, oil companies, and financial institutions,” the Syrian leader said in an exclusive interview with TeleSUR. 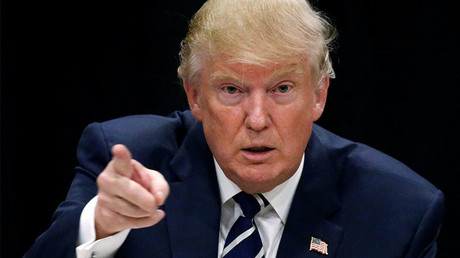 He referred to the fact that Trump came to power on a political platform promising a departure from the interventionist policy of the previous US president, Barack Obama, but soon forgot his promises …

I think the dam’ Russkies are almost as dismayed by the POTUS’s performance as I would have been had I not disbelieved the wee scamp right from before the start—their dismay shows that they have a good heart but are a wee bit gullible. More the fool them, then.

Yep, that’s it. (And when The Establishment pulls the rug out from under, just keep smiling*).

*  More so if ever challenged …

just read the quote, below, then try to tell me this is what ‘they’ voted for—

The president of Austria has raised quite a few eyebrows after stating that there may come a day when all women are asked to wear headscarves out of solidarity, citing discrimination faced by Muslims in the country.
Alexander Van der Bellen, who made the statements while speaking to students on Monday, began by stating that he believes it is “every woman’s right to wear whatever she likes.”
However, referring to discrimination against Muslims in Austria, the leader went on to state that “if this continues… with the widely spreading Islamophobia, the day will come when we have to ask all women to wear a headscarf – all – out of solidarity to those who do it for religious reasons.”

—but then again, it could always be those knavish Russians twisting the truths spoken to make traps for fools* .

Force them to wear whatever they like? I’m hip!

Force them to label themselves as brain-dead slaves to a system created a thousand years ago in the name of an invisible intangible spook by a pederast? Not good … but someone voted for him …

* Fools like moi. I always bite the red herring. (Bite? Hell, I savage the little buggers…)

“Beam me up, Scotty—

—there’s not a great deal of intelligent life down here~!”

our little idiosyncrasies. Some of us even dedicate our lives to idiot-syncrasies, which is more than doubleplus ungood.

who seems to have slipped the leash back in chapter 1. I no longer trust anything I read in modern media, it could be simple typos (nothing wrong with that if no wars are started because of them) or even the deplorable state of modern journalism. By way of anticipating rebuttitive squawks I offer this verbatim snippet —

Though her eyes are naturally large, she wears contact lenses to enhance them, boosting the size of her iris from 13.5cm to 16.2cm …

“…but can you imagine the effect on a driver coming the other way? …

Damn. He tells it much better than I. Perhaps it really is just a proofing error, the mind would boggle otherwise. Anyway, here’s your link:  CLICK HERE

And now, with a set precedent preceding me: I wonder how much it would cost to have my own visage enhanced …

so make the most of it.

And remember that greatest of all homilies—

The Trump Administration’s declaration of war on whistleblowers and Wikileaks is one of the greatest disappointments in these first 100 days. Donald Trump rode into the White House with promises that he would “drain the swamp,” meaning that he would overturn the apple carts of Washington’s vested interests. By unleashing those same vested interests on those who hold them in check – the whistleblowers and those who publish their revelations – he has turned his back on those who elected him.

Julian Assange, along with the whistleblowers who reveal to us the evil that is being done in our name, are heroes. They deserve our respect and admiration, not a prison cell. If we allow this president to declare war on those who tell the truth, we have only ourselves to blame.

And always remember: YOU voted for them.

A vote for anyone was and always is a vote not for the charismatic oaf-of-the-day but for The System.

So I am pure and as blameless as the driven snow—

—and I never shall.

Oafs come and go, they carpe their diem and last as long as shadows but The System is eternal. You, poor clever little well-intended voting dupe … ain’t gonna change it.

* Dammit, I don’t do a very good American accent, but hopefully you get the message. In the meantime it’s word association time:

Q:  What do we all associate with the word ‘Donald’?

(Bugger, I was going to switch now to rhyming slang but at this point I’ll give it all away.)

Now, Voter, go enjoy the fruits of your labours:   you deserve them.

recently on what was to my uneducated (and deeply suspicious) eye a ‘mystery’ aircraft making a pass at Invercargill.

—and having viewed it I wonder if the two are perhaps somehow related?

As for the Met folks—I did try to let them know but after jumping through electronic hoops for ages, almost to the point of what colour knickers The Spouse wears when feeding the birds and at what times … I gave up.

But for anyone interested, this is all their rain radars have been showing us in the Chch and Southland catchments for days:

—but I dare say it’s all down to an act of God. God has been keeping tiny bands of rain in the same places for days, and who would I be to figure the likes of He?

As for letting the principals know:

So I’ll open with a chestnut that seemed ever so funny, once—

Moving on … think ‘variation on a theme’, but this time in all seriosity and with no traps in mind (and no puns intended, I promise you*).

onboard desktop dictionary now serves as point of entry to my theme for the day. Using it and our own experiences, what can we deduce about ‘door’, hmmm?

“Sir—are you alluding to the fact that doors can be opened?”

True, too. Doors serve the useful function of being openable as well as blocking passage.

If you can’t open a door, is it still a door?

So let me draw your attention to one of the unresolved mysteries of our time. Ever heard of Wepwawet?

No, not many have. But quite a few are/were aware that one Rudolph Gantenbrink esq. drove a wee robotic device of his own devising up one of the mystery shafts in the GP of E at Giza.

They named the wee beastie Upuaut** and it performed beautifully, toddling up the shaft like a bought one until it reached an unexpected blocked up road-block. Not good. It snapped the now iconic image of the road-block, which was promptly named ‘Door’—

—by almost everyone referring to it. Okay then — everyone. Picky …

The above snap is one from Upuaut and appears on Gantenbrink’s own site, more accurately labelled as ‘stone slab’. I like that—doors can be opened, slabs are a bit unequivocal that way.

We are also told that those apparent artefacts on the slab are copper handles. I put this suggestion in my “Awwww … gimme a break!” box.

To my uneducated eye they look more like yer basic electrical contacts, which would be pushing the limits of fancy a bit far ‘cos the ancients never had no electricity***.

They (moderns) could always sail another (more recent) robot up to that putative door and slap a multimeter across those handles, check for any signs of electrical potentials and/or resistivity. Perhaps (this is the CT in me coming out now) ‘they’ have already done that, shivered, and shut the project down? Who knows****?

that ol’ Gantenbrink wanted to do a lot more with upgraded robots but got promptly banned from the site by everyone’s favourite ol’ buddy (Zahi Hawass); which the CT in me thinks was for obvious but unmentionable reasons. I guess we’ll never know.

It’s years since I’ve been this way, so I’ll have to do some updating; don’t wait up …

the Great Pyramid of Giza

Ye gods. From all the burbling literature one could expect something a bit more impressive than a cute little pile of rubble, no?

*** Someone said that the (now lost~!) ‘Baghdad battery’ could equally be a pickle jar …

**** And how the hell would we ever know? (Dammit—we need a few more Snowdens.)

Turkish turkeys? Why not … it’s another case of hee hoo—

Turkey is a major transit point for migrants headed to Europe. The Turkish government doesn’t want these migrants to stay in Turkey. So it has little reason to stop them from leaving for Europe.

This gives Turkey leverage with the EU. The Turks have essentially said, “Give us what we want or we’ll open the floodgates.”

What the Turks want is a lot of money.

Last year, Brussels partially gave in to the blackmail—to the tune of $6 billion. In return, the Turks agreed to stop migrants from illegally entering Europe.

(And no, this parade isn’t turkeys—they’re animated self portraits)

You know you want to …